Red Youth urges all our readers, supporters and friends to read, endorse, share, discuss and understand the statement issued by the Party for Socialism and Liberation on the unfolding events in Baltimore. All power to the revolutionary sections of the US labour movement. Each one, teach one! 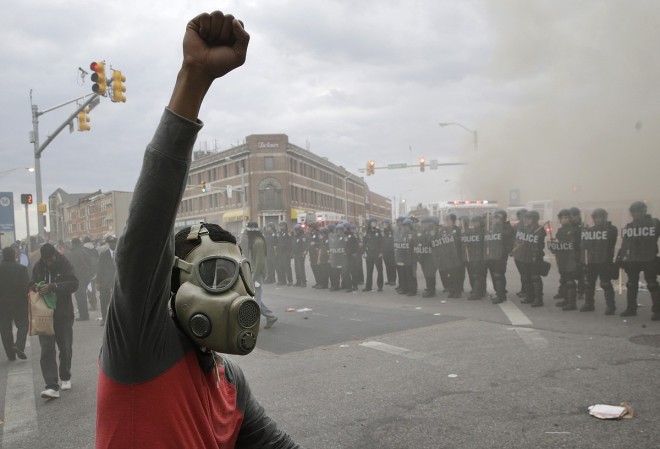 “They are destroying their own neighborhoods!” the news anchors shout. Yes, and Nat Turner destroyed “his own” plantation. We wouldn’t be surprised if some of his associates first ransacked the cupboards either.

Was Baltimore not destroyed before yesterday? Who really tore up its neighborhoods? Who split the city’s spine? Which 9th graders at Forest Park or Fredrick Douglass high school boarded up the city’s 47,000 vacant properties? Was it the Bloods or the Crips that eliminated or outsourced 100,000 manufacturing jobs? Which teenagers let the city’s streets and services erode? Was it the kid with the red or black bandanna that cut the after-school programs? Which one recently settled lawsuits for the brutal beatings of Jerriel Lyles, Venus Green and Starr Brown? And which one severed Freddie Gray’s neck?

Take a 5-minute walk through any of the forgotten neighborhoods where yesterday’s clashes took place. From every angle society is telling these young people, “we do not give a damn about you,” and now they are returning the middle finger. They feel they have nothing to lose.

That is the essential truth that all the racist commentary and liberal lectures are leaving out.

The first rule of struggle, learned by every striking worker and every police brutality activist, is that you cannot trust the corporate media to tell the real story and give the people’s perspective. The retelling of Saturday’s violence near Camden Yards left out the fact that thousands had marched powerfully and without incident until they came into contact with groups of drunk white racists who provoked and assaulted them. Photos of white protesters coming to the assistance of their Black counterparts were portrayed as the opposite, as if there was a “race riot” initiated by aggressive Black people. A white woman photographed supposedly being robbed was, according to eyewitnesses, actually lunging for a Black man’s bag.

Then came the lie about the Bloods, Crips and Black Guerrilla Family – the claim that they had signed a truce to jointly kill cops. In fact, their truce was aimed at unifying the city’s young Black men at a critical time of struggle. These organizations have been in the streets – along with the Nation of Islam and other community groups – trying to minimize looting and refocus the youth’s righteous militancy.

That militancy has to be understood and accepted. It is not going away. The young people in the streets are tired of hearing that they must work within the very system that is brutalizing them – the same system that keeps letting killer cops walk. And although many tactics have displayed the people’s unity and power, from die-ins to mass marches, these have not materially changed conditions on the ground, nor stopped the epidemic of police terror. Even with a Black mayor, attorney general and president, there has been no justice. President Obama called those on the streets “thugs” who need to “be treated like criminals.” So when the politicians and community misleaders say “this violence accomplishes nothing,” many young people rightfully wonder, “and what has your way accomplished?”

As the young people came to feel their collective power, they have first gone after the easiest targets, the retail stores in their own neighborhoods. The police and the politicians above them were of course perfectly willing to let this happen.

When state authority appears to collapse, people go after the things they have long been denied or cannot normally afford. For many in Baltimore, that includes basic household items, food, cleaning supplies and diapers – which is what one could see being taken from CVS.

But the phenomenon of property destruction and looting is common to all rebellions and revolutions throughout history. The American Revolution’s Sons of Liberty, who we’re taught to admire and who today’s Tea Party claims to follow, sacked the wine cellars of their enemies, broke their windows and dragged them out of their homes to humiliate them in the streets. Of course, this was not the conduct of the most serious and dedicated rebels, but no one teaches that such excesses and drunken revelry invalidated the American Revolution. That event is understood for its deeper social causes.

In fact, revolutionary action and violence is upheld as a righteous thing as long as it happened over 200 years ago — and was led by rich white men and slaveholders!

The PSL is joining with those on the ground in Baltimore who are making the case that it is far better to direct the unfolding rebellion towards the real power: City Hall, the Inner Harbor, the neighborhoods where the the ruling class luxuriates and the Wall Street banks that directed the city’s de-industrialization. This rebellion needs to spread to cities and towns across the country, among all poor and oppressed people. It needs to be supported by people of conscience from all walks of life, who understood that this country is overdue for a change, overdue for a revolution.

All that requires more organization and coordination. That requires dedicated revolutionaries who will first and foremost stand with the brave young rebels rather than lecture and condemn them.